Just as Monday was a “mean reversion” day, Tuesday was a “momentum” day. Currencies tended to keep going the way they were going.

This is the same graph as I had yesterday, except the 450 line is facing the opposite way. In this graph, currencies that are on the line are those that moved the same percentage in the same direction both Monday and Tuesday. You can see that while the relationship isn’t perfect, it’s pretty good. 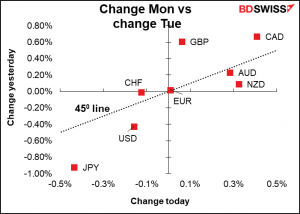 What was the trigger? Again, probably nothing in particular – just a reversal of the previous panic. Perhaps the markets were comforted by calm words from various Fed officials. New York Fed President Williams (V), who Monday said rate hikes were “quite a ways off.” Tuesday said they were “still way off in the future.” Cleveland Fed President Mester (NV) said she’d prefer “to see how things evolve over the summer” before deciding, particularly with regards to the labor market. “When we get to September, I’ll think we’ll have a little more clarity and then we can make decisions about our monetary policy,” she said.

Of course, the most important comments were from the Big Kahuna himself, Fed Chair Powell, who testified before the House Select Subcommittee on the Coronavirus Crisis. As expected, there were a lot of questions about inflation. Powell didn’t say anything different from what he said in his comments after the FOMC meeting: most of the rise in inflation is due to transitory effects arising from the reopening of the economy, but these effects have been larger than they expected and could turn out to be more persistent. He emphasized that the FOMC “will wait for actual evidence of actual inflation or other imbalances” before hiking rates and not move in response to projections, which of course is the opposite of what they’re doing now, which is holding off hiking rates in the face of higher inflation because of their projection that it’s only temporary. But “a foolish consistency is the hobgoblin of little minds,” as Emerson said.

In any case, bonds rallied on the comments, with yields returning pretty much back to where they were before the FOMC meeting. Lower yields helped stock markets and other risk assets to recover. In the FX market, that meant the commodity currencies gained and the safe-haven yen fell, followed by the safe-haven USD. 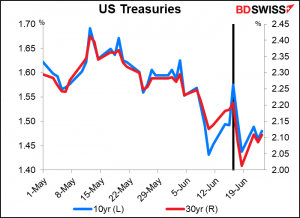 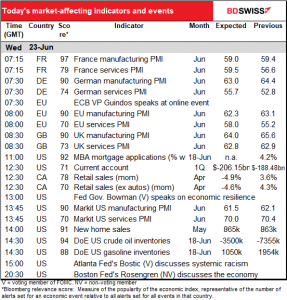 The main focus today will be on the preliminary purchasing managers’ indices (PMIs) for the major industrial countries. We had Japan out overnight; it showed a surprising fall in the manufacturing PMI, surprising because Japan’s manufacturing PMI is relatively low to begin with. On the other hand, the service-sector PMI gained somewhat

For the others, the manufacturing PMIs are expected to be a bit lower, probably because they’re so high to begin with. PMIs don’t climb indefinitely. Levels over 60 still show robust expansion.

The service-sector PMIs are expected to show large gains for those that are under 60. The US, which is at an unusually high 70.4, is expected to see a small decline – no surprise there.

All told, the composite PMIs are expected to rise. That’s natural since the service-sector indices are expected to rise and the composite indices largely follow the service-sector indices, as the service sector is far and away the largest part of most major economies. These would be good figures that would probably help commodity prices to recover and thereby boost the commodity currencies. They might also boost the dollar at the same time, by reinforcing expectations of tighter Fed policy. Currency pairs such as AUD/JPY and CAD/EUR might be the best way to take advantage of expectations of a stronger global economy. 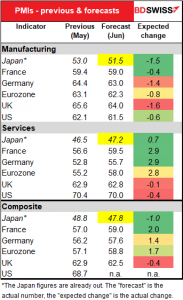 The US current deficit is forecast to approach the record deficit of $209.6bn set in December 2005. That’s pretty amazing, considering how much less oil the US imports now. In the old days this would’ve been distinctly negative for the dollar, but nowadays it’s capital flows, not trade flows, that determine a currency. 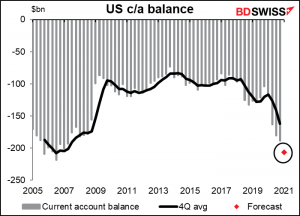 After two months of solid growth, Canada’s retail sales are expected to decline in April. This is no surprise as Statistics Canada is now releasing a preliminary version of this indicator, which was down 5.1% mom in April (including autos) amid renewed pandemic restrictions that forced many stores to close to in-person shoppers. This may disturb some investors but shouldn’t be much of an obstacle, as we’ve seen elsewhere that spending bounces back pretty quickly once restrictions are lifted. 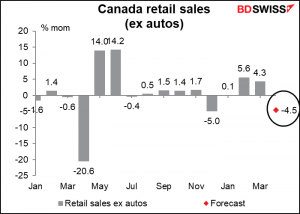 Besides, even after the decline, sales are expected to be 8.4% above pre-pandemic levels. 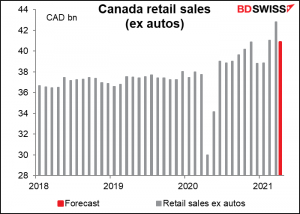 US new home sales are expected to be up a small 0.9% mom. Existing home sales, which came out earlier in the week, beat expectations; they were expected to be down 2.4% mom but instead were down only 0.9%. Both these moves could be better characterized as unchanged or stable. That’s pretty good, considering how much higher sales are now than before the pandemic began. 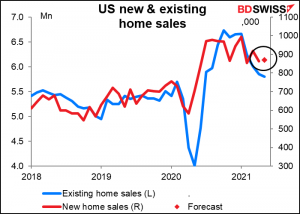 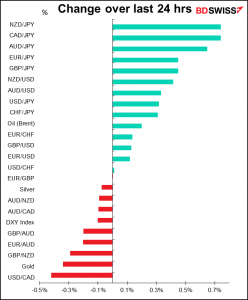